The latest novel in the World of Lasniniar series is now available for pre-order from all the major ebook retailers! Harbingers picks up right where Void Walker leaves off in Iarion and Barlo’s adventures involving the Unborn.

The ebook version is available for the promotional price of $3.99 until the official release date (January 18th, 2017). Here are the book details and links: 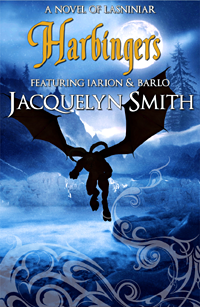 Just when he thought his problems might finally be over…

Iarion has returned from beyond the Void to find Lasniniar in chaos. Humans and elves are engaged in all-out war, fueled by the demands of the Unborn. Meanwhile, he and Barlo are on the run for a crime too heinous to contemplate.

And Iarion has yet to realize he isn’t the only one to survive the journey through the endless dark.

This fast-paced novel adventure is Book 6 in the World of Lasniniar epic fantasy series, and the sequel to Void Walker.

I’m also super-excited to share my new book trailer that showcases the entire Lasniniar series (so far) and features Harbingers. (I’ve had it ready to go for a few months now, but I had to wait until I could pin down a release date for Harbingers.) Like all my other trailers, I made this one myself, and I think it’s my best one yet: