Earlier this year, I had an idea for a new, short Lasniniar adventure. (Actually, not that short. It’s the first Legend of Lasniniar to go beyond novelette into novella range.) I’ve been holding back on releasing it because it’s a holiday-themed story.

I know it’s only August, but Christmas is 17 weeks away, so I thought I would at least make it available as a pre-order to get the ball rolling. (Pre-orders are great for several reasons, the most important being that the process gets my titles fast-tracked into the major retailers.)

So Father Solstice is now available for pre-order for only $0.99 with a release date of September 19th. **PLEASE NOTE: The price will likely increase after the official release date.** Here are the links and details: 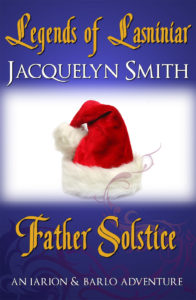 Traditions are a part of every holiday, but where do they come from in the first place–and how long does it take for them to shift into something else entirely?

Iarion and Barlo are about to find out as they return to Nal Huraseadro for their first visit since their last Solstice adventure there. And this time, the city needs its unsung heroes more than ever.

This 21,000 word novella adventure takes place between the prologue and first chapter of Storm Rider from the World of Lasniniar epic fantasy series, and is a follow-up to Legends of Lasniniar: A Solstice Tale.

If you enjoy adventures like A Solstice Tale, or Mum’s the Word, Father Solstice is along the same lines, with Iarion and Barlo solving problems and wreaking havoc in equal measure, and lots of quirky humor besides. 😉